Consumer Electronics talks exclusively with Nicholas Tse. When we mention Nicholas Tse, we say he’s an absolute super-popular star. He seems to be pursued by the lens every single day. However, people finally focus on his emotional life no matter how they change. As such, more stories behind the Hong Kong Film Awards movie king born in the 1980s are ignored. This time, we don’t make a detailed inquiry into his emotional life or pay attention to gossip. We only talk about movies, songs, games and guitars. However, this has a different appeal of its own. 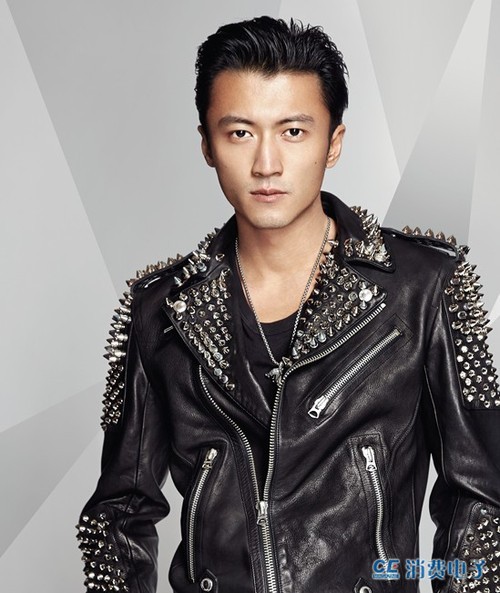 He Plays a Firefighter for the First Time, and Fully Shows the Warm-Blooded Nature of a Man.

The disaster action blockbuster As the Light Goes Out that has been greatly focused upon due to its unique story theme and star-studded lineup will raise the curtain of the New Year’s movie market. In the film, Nicholas Tse plays the role of a firefighter for the first time. He continues to give full play to his ‘workaholic’ character and fully reveals the warm-blooded nature of a man in thrilling scenes of emergency rescue.

As he had never played a firefighter before, Nicholas Tse expressed great interest in the movie’s theme. However, what really touched him were the script and the positive power passed by the story to the audience. He told our journalist that modern people have a negative mood that makes it seem like the end of the world is about to come. They’re so desperate because they feel the future can’t be mastered, while this movie conveys faith: it says you must have an optimistic mood in the face of any problem, and it is necessary to do the right thing even in a frightening and dark mental state. This is what touched Nicholas Tse most about the movie.

Certainly, a firefighter is not a role which is easy to play. Rescue operations require not only swift action but also the skillful usage of various rescue tools. In order to play the role well, as part of his preparation for the movie, Nicholas Tse went to the training center of a fire control bureau to have an authentic experience. “All of our performers began with learning how to connect a hose and how to employ an all-purpose axe, power-driven pincers and toothless saw,” he said. “We also shouldered a hosepipe with the firefighters. All this real experience was very key for us.” 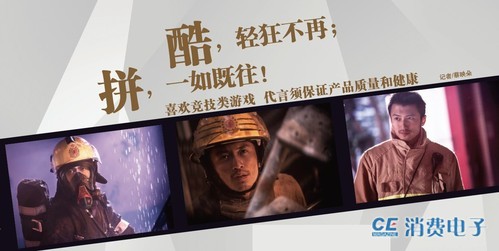 In the final trailer for As the Light Goes out, Nicholas Tse spoke these significant lines: “I’m clear about the orders and I know a firefighter shouldn’t sacrifice his life to save another. We only hope to save as many lives as possible.” Suddenly, a huge fire seems to rush into the sky, filling the air with smoke; a tense rhythm underscores a shocking explosion scene… At just over 2 minutes, the trailer tightly grasped the hearts of its viewers. Recalling the breathtaking shooting processes in the movie, Nicholas Tse said, “It was very impressive, and the process of shooting dense smoke was especially difficult because the environment was very stuffy. We all wore thick, heavy firefighter uniforms and masks, and the air couldn’t circulate. To be honest, wearing the mask was uncomfortable, and the situation didn’t improve much after taking off it because the outside was filled with smoke. To save time, I generally didn’t take my mask off because it would take at least 10 minutes to take it off or put it back on. Ordinary firefighters can’t insist, but I could insist for another 10 minutes.”

The selfless spirit of Nicholas Tse is well-known, and he insists on performing his action scenes himself without using stunt performers. He has acted in plenty of dangerous scenes. In As the Light Goes Out, he continues this tradition. He said, “I care very much whether it will bring real feelings to the audience on screen. If you use substitutes, the feeling will be quite different. It won’t be visceral enough. I also hope my children will see their father really contribute to the movie when they watch it. I don’t want them to see an unreal scene.” It is because of his insistence that Nicholas Tse has succeeded in creating many characters and roles that are regarded as classics. He has deeply moved every audience member and won much praise.

In terms of the profession of an actor, Nicholas Tse said, “What attracts me most about the profession is that it is full of challenges. I like to challenge myself. Every role I choose is something I haven’t tried before. I can gain a sense of satisfaction and achievement from the challenge of moulding every role.” 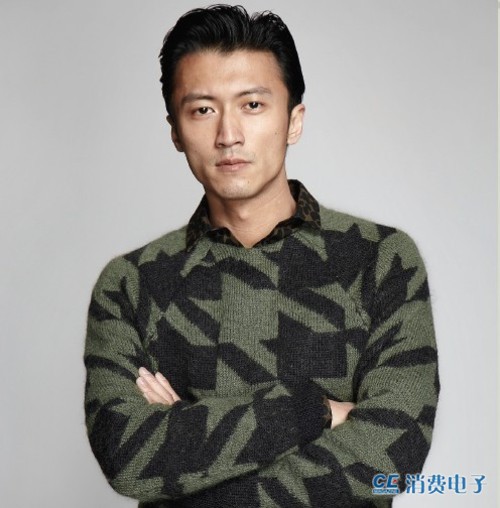 Nicholas’s ardent love for gaming has long been well-known. When enjoying the pleasant sensation and joy of gaming, he also extends games to his own work.

Aside from being an actor, there is another important label on Nicholas Tse: singer. Although Nicholas has put more energy into acting in recent years, his love for music has never waned. He said, “I started out as a singer. That’s what I love. It’ll never change.”

Recently, Nicholas Tse wrote and sang the movie theme song ‘Love Above All’ for As the Light Goes Out. This is the first song he has released since Last of Nicholas Tse. He explained that the whole process of the song’s creation was quite smooth from writing and recording to completion. It primarily expresses ‘love’ through a lens of environmental protection. He said, “In fact, I was thinking about the song for a long time. I had the idea in mind before I joined As the Light Goes Out. I originally planned to sing it at my concerts. However, I later realized that the song was suitable for As the Light Goes Out. The film and the song both emphasize the big theme of love. The director was also happy to use the song as the movie’s theme song”. With regard to creative inspiration, Nicholas Tse said, “The domestic environmental problem has become more and more severe in the last two years, and people always complain about how much rubbish there is in the environment when they generate rubbish themselves without any scruple. I hope the song can sound an alarm for everyone.”

‘Look at the great changes in the world. The blank remains. What the intelligent part of the universe depends on to dominate. Construction or damage. Silence can’t change the future. We should be concerned. Stop all selfish hurt. The world needs your love…’ Through Love above all, music fans can hear an appeal for environmental protection and the long-lost sound.

As a game image spokesperson, two principles are insisted on for endorsement. Except for entertainment and singing causes, the ardent love of Nicholas Tse for games has long been well-known. He told the journalist that he usually likes playing competitive games. First, it can pass the time, and second he can forget himself and relax. Also, every time he completes a mission or earns an upgrade, he will have a sense of achievement. This is the fascination of gaming.

What needs to be stressed is that Nicholas Tse is not a pure player. He also extends gaming to his own work when enjoying the pleasant sensation and joy of games. In September 2013, Nicholas Tse formally became the image spokesperson of the popular online game Cross Fire; he found inspiration in the game and created a theme song for the game himself.

When talking about the combination of stars and games, Nicholas Tse has his own original understanding: “On the one hand, stars can popularize games, making more people know about them; on the other hand, games are an output of a certain kind of image of stars, making stars show more aspects of their characters to the audience”. However, in the choice of the product for endorsement, Nicholas Tse has his own principle: “First, the product should conform to my image, which means I have a floor for the usage of the product; second, I must guarantee the product’s quality and health. These are two points I insist on.” 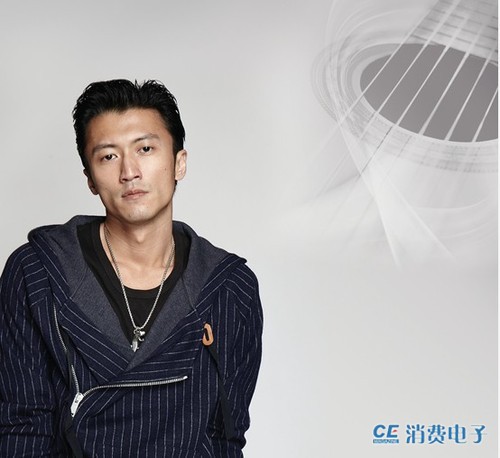 No matter how the cause of Nicholas Tse develops, the energetic warm-blooded rock singer who wore a waistcoat on the stage and an electric guitar on his back is an indelible memory forever in the hearts of music fans.

When Collecting Guitars, it is Important to Discover, Explore and Maintain

From singer to performer to video game spokesperson, the star’s road of Nicholas Tse has become smoother and smoother. Meanwhile, his status in commercial circles has become more prominent day by day. The image post production company invested and established by him named Post Production Office Limited is thriving as its name’s implied meaning and scale continuously enlarges. Subsidiaries have been set up in Beijing and Shanghai in succession. Nicholas Tse also registered 6 new companies named Post Production Office Limited. He has also begun to focus on a large range of configuration and electronic equipment used for producing special effects in films. He is passionately operating a top-level special effects company created through his own efforts. According to the introduction, all the behind-the-scenes production was finished by the special effects company of Nicholas Tse.

However, no matter how the cause of Nicholas Tse develops, the energetic warm-blooded rock singer who wore wear a waistcoat on the stage and an electric guitar on his back is an indelible memory forever in the hearts of music fans. The guitar is the most faithful companion of Nicholas Tse.

In ordinary times, Nicholas Tse likes collecting guitars. It is well-known that he has collected more than 200 guitars. Among them, some are custom-made by masters, some are special limited editions and some are guitars created according to his own participation and design. When the journalist asked which of his guitars is the most valuable, he answered, “Since it’s about collection, the prices must range from high to low. But for me, the important thing is the process of discovery, exploration and maintenance. This is the best way to enjoy it.”

About how to select guitars, Nicholas Tse said that it is OK to do this by heart: “Because a guitar is a musical instrument for playing after all. We use it to express our inner hearts.”

In this interview, Nicholas Tse still revealed his familiar cool self. In answering questions, he never spoke more than he needed to. Particularly when topics other than movies and work were mentioned, his words were much less apparent. However, with the coming of the New Year, Nicholas Tse still remembered to send New Year’s wishes to the readers, saying, “I hope everyone makes more progress and gains new harvests in the New Year”.