Before the interview, this reporter couldn’t help playing Eason Chan’s machine-gun-style chanting again and again in his mind: ‘Every time they failed to kill you/they can’t kill you/so you recover again/you must shape up/you can’t die.’ How interesting and playful itsounds! In real life, Eason is also a humorous person. He laughed loudly from time to time during our interview, and exhibited his playful personality in front of the camera without any reserve. 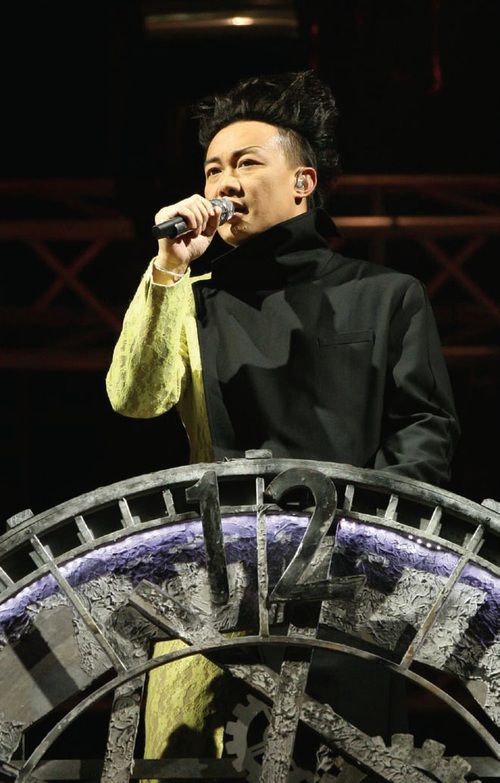 Playful as always, but also contemplative aboutlife in his new album

Not long ago, Eason officially released his new Cantonese album titled…3mm in Mainland China. When asked about why the title was so special, he explained, “…3mm actually refers to three married men – Swing members Eric Kwok and Jerald, and I. Back in 2006, Swing helped me make an important album titled Life continues…. Back then, only Jerald was married. But now, 6 years later, we all have families. Jerald and I have becomefathers. So this new album is a continuation of that one. It is a reunion of three married men. The ellipsis in Life continues… comes at the end, while in the title of the new album it is placed at the beginning. This is how this continuation is represented.” When it comes to the new album, Eason had so much to say.

Reporter: The new album’s leading track is really fast-tempo. Is this the style ofthe new album? Which style, fast-paced or slow-paced, do you think is easier for you to handle?

Eason Chan: That song was composed by Swing, and its lyrics by Wyman. Don’t you think that the fast pace is ‘refreshing’? Wyman’s lyrics are also fast-paced (Laughter).

As a matter of fact, fast rhythmic songs, like soothing slow songs, are just another form of expression. I love this retro style song very much. In order to find inspiration for its MV, the director and I went back to the 1980s and studied the style ofthe MVs of such Cantopop superstars as Leslie Cheung and Alan Tam. We spent four hours on the makeup to come up with authentic New Romance Makeup of the 80s.

In addition to pretty girls, neon disco lights, smoke, wire fences, steel and the like featured heavily in the MVs of the 80s. The day we shot the MV for this song, I spent a lot of time in smoke and under disco lights. The smoke machine kept generating smoke and fog soI almost couldn’t see anybody. But everybody had greatfun and I felt like going back to the 80s, when I was still a kid and I loved watching the MVs of ‘brother’ Cheung and ‘headmaster’ Tan. Imagine that today I could go back to their times, sing in their style and have an80s-style MV of my own. It was really like a dream.

Reporter: As far as I know, you tend to give your fans surprises every time you release a new album. What about this time? Arethere any breakthroughs?

Eason Chan: ‘Surprises?’ Well, you should tell me whether this album ‘surprises’ you or not. If you tell me that this album in any way surprises you in terms of ideas, music, styling or whatever, then I’d say that I’ve made some new breakthroughs. What’s your take?

Reporter: Of course it surprised me! Very Heavy Flavor! Talk about the theme, things that money can’t buy. What do you think of it? Do you have any personal experience?

Eason Chan: ‘Things that money can’t buy’ is our theme for this album. A few good friends of mine and I sat down and discussed the theme for the new album. Finally, we all agreed to base the album on this theme. So each song focuses on a specific topic related to the theme. It’s our hope that the audience will think about it and get some insight from these songs, such as ‘Heavy Flavor’, which talks about resilience, ‘Swipe Card’ or ‘Lu Ka’, which touch on human relationships, and ‘Xiao Si Zhen’, which is about a sense of humor.

As for personal experience, I’d like totake ‘Swipe Card’as anexample. It means ‘owe somebody a favor’ in Hong Kong. This is something that we all do to others in one way or another. Wing Him Chan’s words describe a picture in whicheveryone wants to take shortcuts and make use of all kinds of relationships to achieve their goals, but don’t forget that you’ll have to repay that debt one day. You must have similar experiences, right? As for ‘sense of humor’, I do have a great sense of humor. Howabout you? (Laughter)

Reporter: Not as humorous as you, of course. As the latest ‘god of song’ in Hong Kong, you have quite a lot of well-known songs. What’s your take on your new album? Which is your favorite song? Are there any stories behind these songs?

Eason Chan: For now, this album is my favorite because it’s new (laughter) and these songs represent my latest ideas. Of course, I owe this album to my company, which has given me more freedom than ever before. With this freedom, at least my music isn’t boring.

In fact, I love each and every piece of the album, although I do prefer the leading song ‘Heavy Flavor’. It’s sung in the style of the 80s, which is my favorite. It comes in two versions. I wantedto pay my respects to Alan Tam, the great singer of a series of classic Cantonese songs. In one version, the first half of the song features my imitation of Alan and the latter half features my own vocal style. But it couldreally fool a lot of people. Some thought Alan and I had sung a duet! Even some colleagues mistook my voice for Alan’s and asked if his name needed to be added (Laughter). That was really cool. In fact, I’d made up my mind early on to invite Alan to be a part of it – that is, a Remix version that features Alan’s own voice. Finally, Headmaster not only worked with me on the new version of this song, but also dancedthe ‘hand-splitting dance’with me for the MV. That was so much fun. In the studio, Alan sang the song in both the 80s and 90s styles for Eric Kwok to choose from. He is such an example in terms of professionalism and dedication to his work! The new version is named ‘The Headmaster Mix – Eason Chan vs The Great Almighty Alan Tam’. It’s included in my next album …3mm Remix Singles, released in November. 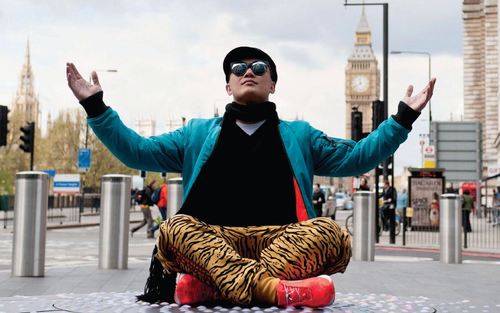 Playful, eccentric, wacky…we have long been accustomed to Eason’s ever-changing and eccentric dress sense. Over time, his highly expressive stage fashion has become an essential scene of the entertainment circle. For Eason, fashion means casual and comfortable clothes, and this is a personal preference that may ignore the opinions of others.

Reporter: I findthat your fashion style has been following the path of ‘novelty’ over recent years. Your recent dressing like a girl is a good example. Were all these your own ideas?

Eason Chan: Yes. It’s very fun, isn’t it? (Proud laughter) I’ve been touring around the world. That means dozens of concerts. I wish to give a bit of a surpriseevery time. Once, I was staging a concert in Foshan and it happened to be the Mid-Autumn Festival. I was really grateful to everyone who came to my concert on such a special day, so I wantedto give them a little surprise. The girly wig that I wore that night was borrowed from Wyman. Before the show kicked off, we were joking around backstage. I felt quite good wearing the wig, so I decided to use it as a prop while singing the very first song ‘Heavy Flavor’. It turned out to be really heavy flavor as the laughter from the audience was uproarious.

Reporter: Your dressing style also wows your fans. But why on earth would you presentyourself in such a fun, wacky manner?

Eason Chan: I’m the director of the ‘Institute for the Insane’. Havingfun is my hobby. I hope people join me in making fun and having fun.

Reporter: Your daily attire is also quite special. I wonder if your wife gives you any advice?

Eason Chan: I dress the way I feel comfortable with. My wife sometimes gives me advice, and so do Wyman and my stylist. The brands that give sponsorship express their ideas too. But I won’t deliberately try to dress up.

Reporter: Everyone has his or her own understanding of fashion. What’s yours?

Eason Chan: My view of fashion is that clothes should be casual and comfortable and that others’ scrutiny is not important. Well…(Pondering for a moment). My best friend Wyman is the most fashionable person of all(Laughter).

Travelling with Mobile Phone & PC, and Being a Fan of Closed-Back Headphones

Gradually, our conversation shifted to the topic of electronic products. The reporter noticed that Eason was clearly less talkative about this topic. It was learned that Eason ison the go and busy working all year round, so he has little energy to pay attention to electronic products, although he is a frequent user of mobile phones and PCs. It is said that it is his habit to put a lot of songs on his mobile phone and PCso that he can listen to them while travelling around.

Eason Chan: Like everybody, I’m a fan of novel electronic gadgets. If I need anything, I don’t mind having it.

Reporter: What are your main considerations when purchasing an electronic product?

Eason Chan: Basically I would look at functionality. Some electronic products are reported to have very fancy features, but may not be worth the money. Of course, some products are really useful and practical.

Reporter: As a singer, you must be very particular about audio devices. Do you have any specific requirements?

Eason Chan: Actually, I spent most of my time travelling around on concert tours, so I always take a PC with me on which I listen to demos of new songs or other songs. So headphones are very important. I prefer closed-back headphones that come with soft pads. Though their large size is not veryconvenient forcarrying around, they’re effective in preventing the interference of external noise.

Reporter: What is your next step at work?

Eason Chan: I just ended my ‘Duo’ world tour that ranfrom March 2010 to October 2012. The tour included dozens of concerts. After a short break, I’ll kick off my ‘Feel Free Feel Music’ series of concerts in December, which will take me to Beijing, Shanghai and Guangzhou. I’ll see my fans soon. 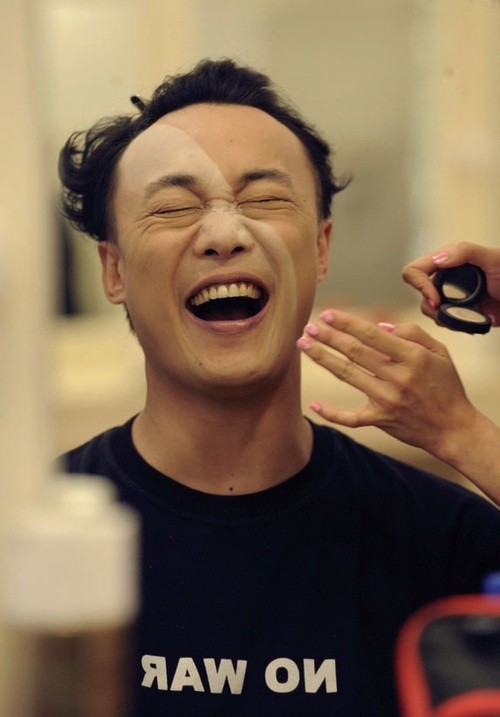 Probably influenced by Eason and his song ‘Swipe Card’, this reporter was also in a playful mood right after the interview, and jotted down his first impressions of Eason:

Playful, eccentric and humorous whenever he can be;

Simple, sincere and free-spirited, what a happy life he’s living!

God of song and icon of pop music, so is he labeled;

Concert tours take him here, there and everywhere.