With the development of 3D NAND flash memory technology, solid state drives (SSD) have threatened the survival of mechanical hard drives that size is small and medium. But in the high-capacity world, mechanical hard drives are still the king in that arae, at least，in the 14TB capacity level, no solid-state drive can easily replace them. Now, the most discussed product,Seagate ,has brought us the Barracuda Pro series, which has a 3.5-inch hard drive with a capacity of up to 14 terabytes .This issue, 《CE Magzine》will show you its charm. 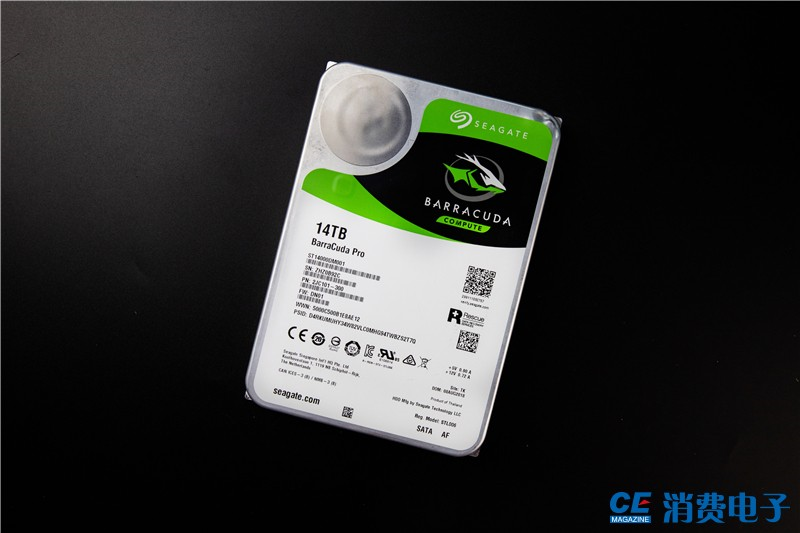 The product we got this time is the 14TB model with the largest capacity in Seagate Barracuda Pro series, which is also known as the helium-sealed hard disk. The hard disk is in a fully sealed structure and filled with helium. Due to the helium-sealed design, the helium-filled hard disk has low air friction at the same rotating speed, and the disk surface temperature can usually be reduced by 6~8 degrees. The closed structure also avoids dust inside the hard disk, which can increase the storage density and reduce the error correction scheme on the premise of ensuring the integrity of data. So you can get more disk capacity on a hard disk, which is actually 1.75 terabytes per disk.

The hard drive has a product information label on the front, and the 14 terabyte logo is almost as impressive as a misprint. 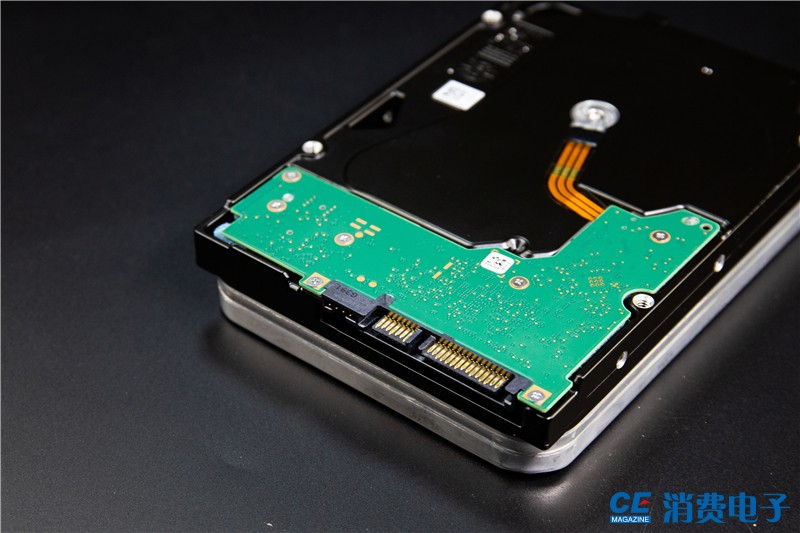 The back of the hard disk is a neat circuit board, circuit board and motor connect with flexible circuit, you can see that the circuit design part is very standard.

There are three screw holes on the left and also right sides of the disk. convenient for fixing the hard disk when installing. It feels heavy in your hand, much heavier than a typical 1TB or 2TBhard drive.

We connected the hard disk to the test platform. After simple initialization, the system could identify this hard disk normally, which had a capacity of 13038.98gb when not formatted. After formatting, the system showed that the actual available capacity was 12.7tb. 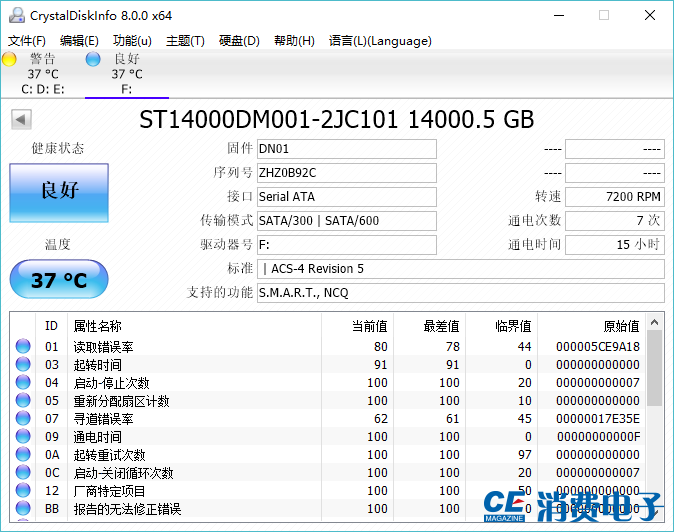 Firstly,you can use CrystalDiskInfo to view the parameters of the hard disk, then you will see that the operating temperature is stable at about 37 degrees, and support NCQ function. 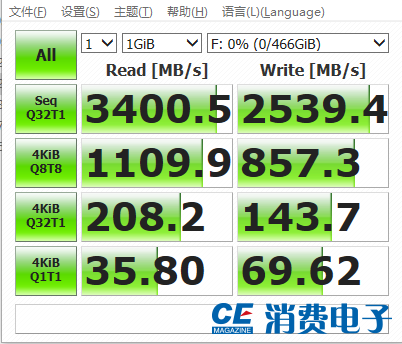 CrystalDiskMark is a relatively common and intuitive test software for storage devices.The test results are usually the limit parameters of the equipment.Through the test, it can be seen that this Barracuda Pro 14TB mechanical hard disk has a continuous reading speed of 265.7MB/s and a continuous writing speed of 254.2MB/s, exceeding the nominal reading and writing speed of 251.4MB/s and 219.6MB/s. But after all it is a mechanical hard disk,we can ignore it’s 4K data random read and write performance. 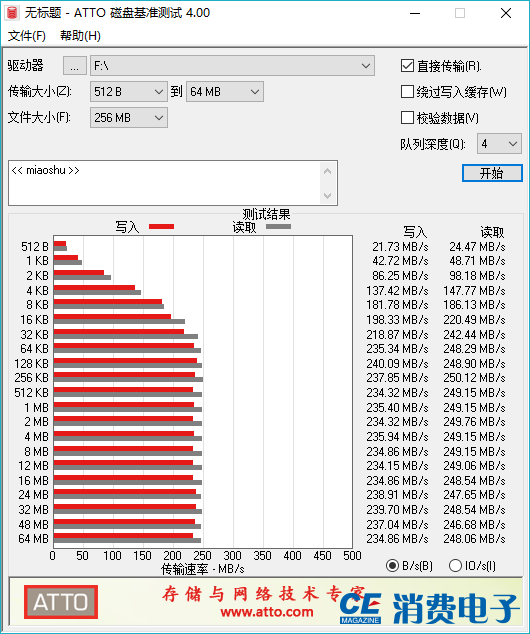 Let’s continue to test with ATTO Disk Benchmark, an easy-to-use Disk transfer rate detection software that can customize the size of test data packets. Here, 512B,1KB,2KB and 64MB data packets are selected for read-write test respectively, which can better simulate the actual usage. After the test data is greater than 32KB, the reading and writing speed of Barracuda Pro’s 14TB mechanical hard disk is basically stable at 249MB/s and 235MB/s.

Thanks to 7200 RPM speed and a 256 MB cache, The continuous reading and writing rate of Barracuda Pro 14T mechanical hard disk in similar products is at an extremely high level.it also has to do with helium filling works, with the help of inert gas low friction and low fever in the same area to achieve the higher storage density and faster head movement. 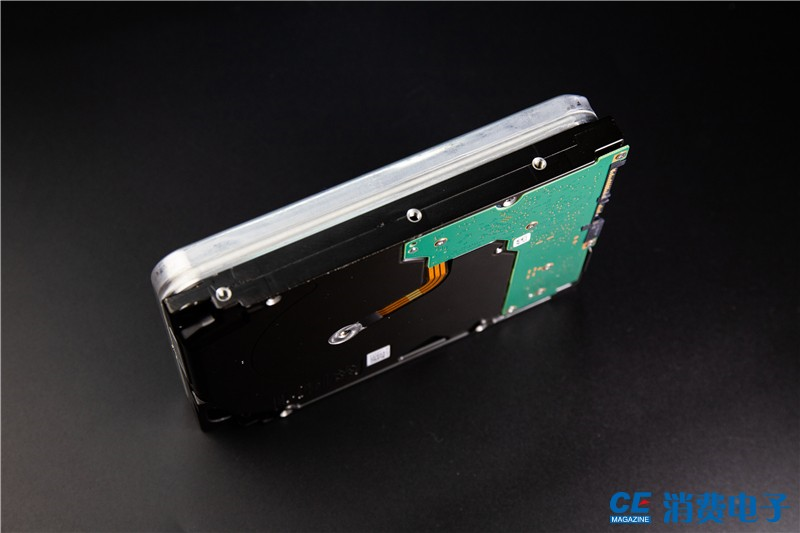 Summary: technology leads the future, especially for people who like large capacity customization 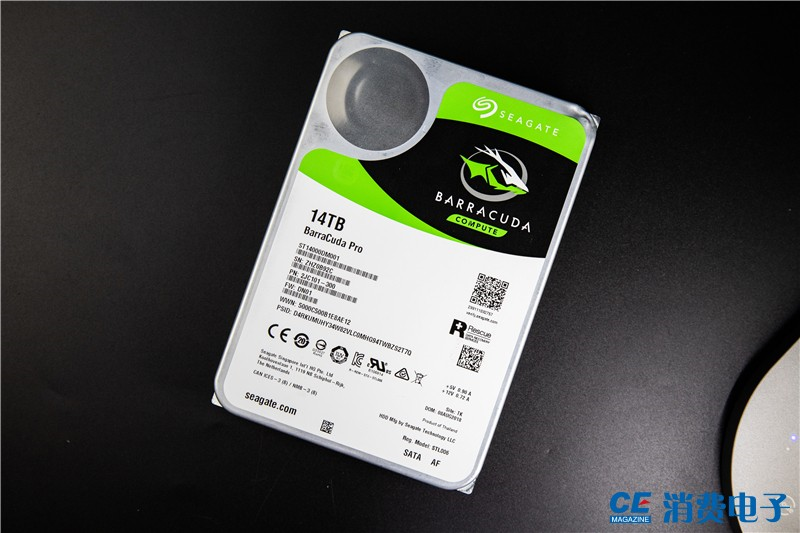