Wang Ning and his party were invited to visit Xu Qin, governor of Hebei Province

In April 1, 2017, the CPC Central Committee, the State Council decided to set Xiongxian, Rongcheng, anxin of Hebei Province and the surrounding areas as the national new districts.

This is a major historic strategic choice made by the Party Central Committee with Comrade Xi Jinping at its core,It is a new district with national significance following the Shenzhen special economic zone and Shanghai Pudong New Area. It is Millennium plan , as well as a major national event.

As soon as the news came out, the whole nation was seething, and people speculated that the Xiongan district would be next Shenzhen, and the next international metropolis would be emerging . The new district is gettiing too much popularity , as if the country’s best quality resources will converge here

To easing Beijing’s non capital function，exploring a new pattern of optimizing development in densely populated areas，adjusting and optimizing the urban layout and spatial structure of Beijing, Tianjin and Hebei，foster innovation and drive new engines，this decision has great practical  and far-reaching historical significance. At the same time , The Central Committee of the CPC and the State Council require all localities and departments to conscientiously implement the important instructions of Comrade Xi Jinping. In accordance with the decision of the Central Committee of the CPC and the State Council, we should unify our thinking, raise awareness, and effectively enhance the “Four Consciousness”, and jointly promote the planning, construction and development of the New District of Hebei Xiongan, With the most advanced concepts and world-class standards for urban design and construction of benchmark projects, to build a model of urban construction. 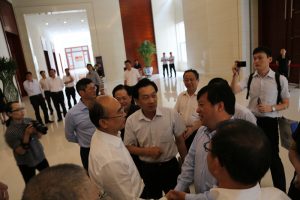 Xu Qin ,provincial governor, togethe with YuanTongli, Hebei Provincial Committee and executive vice governor , Li Qian, Vice governor of Hebei province, Zhu Haowen, Secretary General of the provincial government of Hebei Province, Gong Xiaofeng, Director of Hebei Provincial Department of industry and information, Song Limin, Deputy Secretary and Deputy Director, Hebei provincial development and Reform Commission , In the course of his busy schedule, he met with representatives of the delegation, and many leaders, together with the two associations, made a special survey to understand the industrial planning of the New District