The tunnel takes you personally on the scene A large number of onlookers attracted by the moving magazine ——CES Asia 2017, opened in Shanghai, the world’s first consumer electronics AR magazine born

Still remember Daily Prophet in the Harry Potter movies? When people in the movie opened the magic newspaper, the characters in the newspaper immediately moved, and the static two -dimensional pictures became dynamic three-dimensional. The audience at that time thought it was nothing but illusory magic, with the rapid developments of science and technology, the magic in movies has become a reality. “Consumer electronics”, which has always been at the forefront of the times, has become such a magic magazine.

More than 450 exhibitors from 22 countries and regions gathered here and released new products and technologies at the exhibition scene with a total area of 40 thousand square meters. As an exhibition brand with fifty years history, the CES (International Consumer Electronics Show) sponsored by CTA has been always an indicator of the consumer electronics industry. 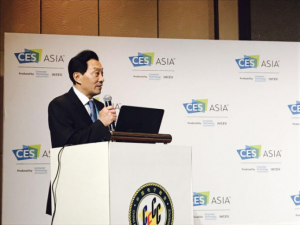 Wang Ning，President of CECC ， delivering a speech at the meeting 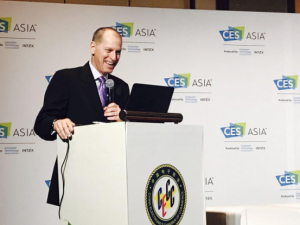 Gary Shapiro, the president and CEO of CTA , addressing at the meeting

Mr Shapiro at the meeting said, CES is very supportive about China “Belt and Road Initiative” policy, china together with many other emerging economies, pursuit innovation and development of Internet technology in the fields of AI, IOT, Smart City and others. Sometimes it’s easy to neglect AI since it’s embedded in daily products. Many entrepreneurs have developed new products and services, and even many products are something we do not yet know we need. What we are doing will be what consumers will choose in the future, so we are very optimistic about the future.” 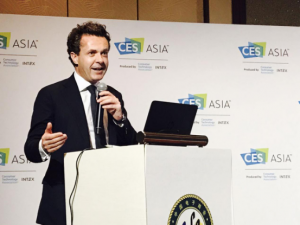 Christophe, mayor of Angers, making a speech at the meeting

First arrived in China, Christophe, mayor of Angers, said: “we set up a special ecological system in western France, regarding Angers as “Silicon Valley” of France. Since Angers enjoys special cultural atmosphere and full of entrepreneurship and innovation passion. In addition, he added that Angers has a special status in France, and CES Asia is a very important platform in terms of France and Angers start-ups. His Shanghai visiting，together with team members, advertised the World Electronic forum (WEF) in October this year. After meeting, Christophe, with a humor, charming personality, talked about Macron, new French President, who is getting on well with him personally, and they are similar in age and qualifications, but the biggest difference is that he does not have a wife who is 24 years older than him .

Mr. Wang Fushan, Deputy Secretary General of CECC, executive president of consumer electronics magazine, as well as the founder and CEO of Shenzhen Xiaofeibao network technology co., Ltd, addressed that Consumer Electronics releasing of the AR magazine in the 2017 Asia CES, special thanks should be extended to Mr Wang, president of CECC. Besides, It is a great honor for consumer electronics to be together with Gary Shapiro ,President and CEO of CTA, Christophe Béchu, a member of French parliament and mayor of Angers, Wei Shaobang, Shenzhen electronics industry association representative and Secretary General of HK Electronic Industry Association, Zhu Qingshun, Secretary General of Singapore Electronic Science and technology with the innovation of the Industry Association, Hu Jianping, Shenzhen electronic industry association representative and vice president of SEG group , and other big names and professionals to participate in and witness this historic moment.

It was said that AR (augmented reality) technology was put forward by 1990, which fused virtual content with authentic contents in real time and creates the interaction between virtuality and reality. And the real AR is the extension and development of the virtual reality. Based on that, augment the real environment so as to create a new experience.

At this forum, Mr WangFushan, Executive President of Consumer Electronics magazine, introduced to the participants, “at present, CE magazine enjoys significant influences on the audience lovers of consumer electronics, many consumers will choose what to buy referring to relevant reports of CE magazine.” “It’s a pleasure for us to release the world’s first consumer electronics AR magazine at this forum,” he said.

CE magazine is supervised by the Ministry of industry and Commerce, sponsored by the CECC, catering to the industry and the latest CE technology and consumer trends. According to statistics of the third party, in network, our magazine has 3.6 million hits, popularized by consumers, enterprises, government, leaders in charge of the CE industry, and we also provide a number of related policies for readers in the CE industry, becoming an important vane of CE industry. 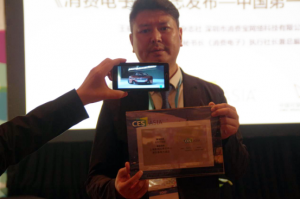 Eric scanned the static page with AR effects in the latest issue of CE magazine by his mobile phone, the static picture suddenly moved up, three-dimensional picture, commentary, music…… many exciting contents immediately appeared vividly. The most popular AR technology, has been applied in the magazine. 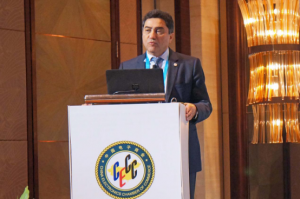 At the Artificial Intelligence Technology Summit, the releasing attracted a lot of attentions from big names and professionals. 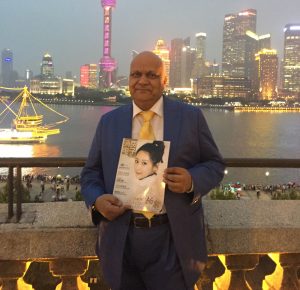 In the mobile Internet era, there are always sayings of “paper dying”, but CE magazine will always conform to the development of the times, lead the fashion of science and technology, achieve pleasant consumption, and provide the readers with the latest and most popular consumer electronic information. It is worth mentioning that MR NK Goyal, President of the Association of India Communications Manufacturers ，also extended strong interest towards CE

He extremely hoped that CE can be introduced to India. NK Goyal said that the India enjoys great market advantages, there are a large number of Chinese consumer electronics and components buyers. At present, both sides have reached a preliminary agreement. And “Consumer Electronics International” will be launched in India in the near future

CE magazine always is committed to be possessed with Chinese and Western features, enjoyed by both the refined and common people, and more tightly connected with time tides.

So far, Consumer Electronics has established cooperative relations with Asian countries and regions such as HK, Singapore and others. In the future, magazine reports and advertisements will be transmitted in many countries around the world.