The small amount of game storage, slow start, load jam, poor heat dissipation, etc. have always been a problem for players. As a key factor in whether the game is smooth or not, computer configuration has always been the direction that major manufacturers strive to optimize. Solid-state hard drives are an indispensable optimization direction among them. Western Digital WD_Black SN750 series NVMe SSD products (hereinafter referred to as SN750), the main game acceleration function. Eyal Bek, vice president of Western Digital, bluntly said that we have broken through the storage boundaries and look forward to providing the hardcore gamers with the competitive advantage they have always dreamed of. What is the performance of the SN750? Next, the “Consumer Electronics” evaluation room will reveal the answer for you.
​

▲ SN750 in the package
This time we installed the 1TB version of the WD_Black SN750 series NVMe SSD without a cooling fan.
In appearance, a black design brings a high-end fashion sense to the SN750. The weight is almost negligible, small and light, and you can’t help wondering how such a small box can store as much capacity as 1TB. The packaging design is very user-friendly. In addition to the position of the memory itself, a semi-circular opening is left at one end, which is easy to take out. In size, the size of 80×22×2.38mm is small and exquisite. In this small size, it has amazing performance strength. In terms of capacity, players can have 250G, 500G, 1T and 2T options. The 2T’s undoubtedly provides a attractive choice for players running very large games and video clips. In terms of service life, the official promotion of the “five-year warranty” is also quite reassuring for the majority of players.
​ 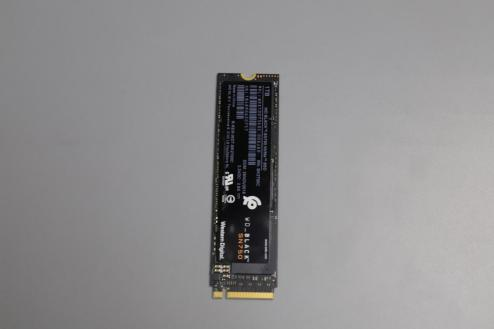 ​
▲ SN750 front
Western Digital’s the product was upgraded from the WD_Black SN720. This third-generation black-plated product has a additional game modes comparing with the second generation. The SN750 is available in two versions with EKWB’s heatsink version and no heatsink, and is equipped with NVMESSD upgraded from 64-layer 3DNAND. In addition to the 250G version, the other capacity is equipped with heatsink, which undoubtedly brings the possibility of the best gaming experience to game enthusiasts. In addition to expensive, this product is almost impeccable in performance. Next, let’s take a look at the specific evaluation parameters.
​

​
▲ SN750 back
First look at the basic information of the hard disk in CrystalDiskInfo. The SN750 style is WDS100T3X0C-00SJG0, the interface uses NVM Express, the transmission mode uses PCIe 3.0 x4, 49 °C is the temperature after the game mode is enabled, and the device drive is F disk. (Enable game mode requires software WD BLACK SSD Dashboard, which can be downloaded from Western Digital’s official website)
​​

▲ SN750 detection screenshot
Through the Benchmark soft test, the total score increased from 3,504 to 4,185 compared to the previous generation of SN720, and the performance has increased significantly. Random read performance increased from 2,680.44 MB/s to 2896.7 MB/s, while random writes declined.
​

▲SN720 VS SN750
Western Digital officially claims that this generation of solid state drives can run at speeds of up to 3,470 m/s and writes at up to 3,000 m/s. Using the ClystallDiskMark test software, it was found that both the running speed and the writing speed were completely up to standard. In the random read speed, compared with the last generation SN720, the SN750 does not show a big difference, and the speed of writing is quite different. From this point of view, this generation of upgrades is mainly reflected in the write speed.
​

▲ open the game mode vs. close the game mode
Using the AS SSD Benchmark soft test, it was found that there was a significant increase in random writes (from 1830.90 MB/S to 2723.93 MB/S), and the total score was also greatly improved.
​

Overall, this solid-state disk, the cool appearance, compact size, strong random read and write speed, and heatsink to choose, which are good advantages for gamers and video editing practitioners. Of course, the price of the 1999 yuan (RMB) also indicates that it is taking the high-end route. If you have a strong demand, it is still very worthwhile to buy one. After all, the fun of playing can’t be delayed by speed.
Share